Located on the south bank of the Yamuna river at Taj Ganj, Agra, is the ivory-white marble mausoleum called Taj Mahal which an emblem of eternal love.

Taj Mahal was built by the Mughal Emperor, Shah Jehan, in loving  memory of his favorite queen Mumtaz Mahal who died on June 17, 1631 while giving birth to their 14th child at the age of 40!

Taj Mahal is one of the Seven Wonders of the World and took nearly 20 years and about 20,000 workers to complete. Ustad Ahmad Lahauri, a Persian from Iran is considered to be the chief architect. Construction started in 1632, and the mausoleum was completed in 1643, while the surrounding buildings and garden were finished five years later. 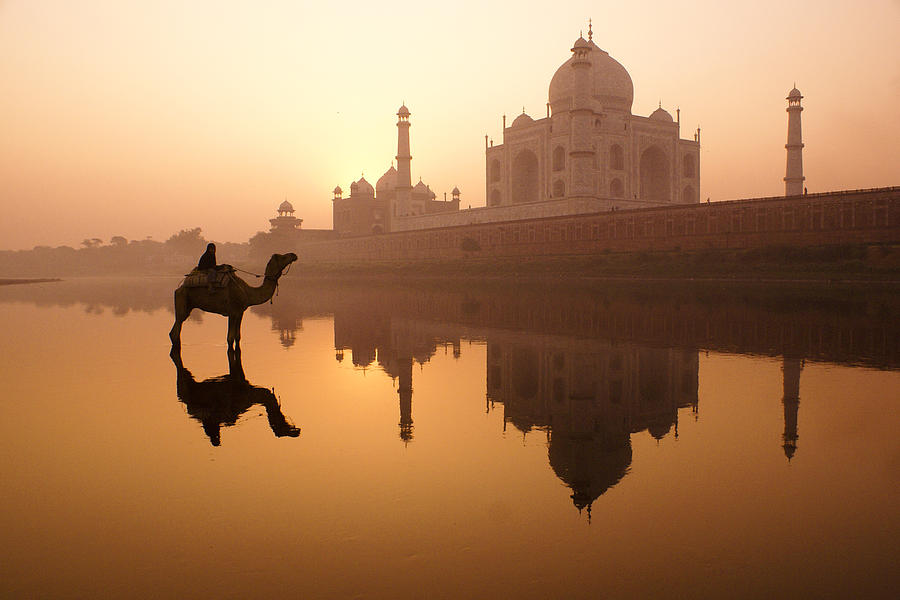 It costed 32 million rupees at that time, which amounts to about 60 Billion Rupees in today’s value.

The Taj Mahal was constructed using materials from all over India and Asia. Over 1,000 elephants were used to transport building materials during the construction. The translucent white marble was brought from Rajasthan, the jasper from Punjab and the jade and crystal from China. The turquoise was from Tibet and the Lapis lazuli from Afghanistan, while the sapphire came from Sri Lanka and the carnelian from Arabia. In all, twenty-eight types of precious and semi-precious stones were inlaid into the white marble.

It is understood that the building expense of Taj Mahal put an enormous strain on the Mughal Treasury, and resulted in a coupe for power in which Emperor Shaha Jehan was deposed by his son Aurangzeb. Shah Jehan spent last of his 8 years of life imprisoned in the Red Fort, about 1 Km away from Taj Mahal. In his failing eye sight, he spent the rest of his days gazing at Taj Mahal through mirrors.

Best Time to Visit – Between October and March.

Taj Mahal is located some 200Kms from Delhi, the capital of India. One can visit Taj Mahal and come back to Delhi on the same day. We offer Same Day Tours to Taj Mahal from Delhi by Car and by Train. It is the most convenient and hassle free way to enjoy your visit to Taj Mahal. The tour starts from hotel/airport early morning and brings you back to Delhi later in the evening.

“The Taj Mahal rises above the banks of the river like a solitary tear suspended on the cheek of time.”  ...
Read More

One of the World's Seven Wonders, the Taj Mahal was built in 1632 by the Mughal emperor Shah Jahan to ...
Read More

One of the World's Seven Wonders, the Taj Mahal was built in 1632 by the Mughal emperor Shah Jahan to ...
Read More
(Visited 574 times, 1 visits today)